It’s a common perception that poets spend all their time scribbling away in lonely garrets. Well, some of the time that’s true, but we also love a good social occasion; and you’ll find that groups meeting to workshop their poems, as well as festivals and readings can all be fairly uproarious affairs.

One of the highlights of the social year for poets is the annual gathering in the Ballroom of the Savile Club in London, when the winners of the National Poetry Competition and the winner of the Ted Hughes Award are both announced and invited to read to the assembled company of literary glitterati. Wine flows freely, we are constantly plied with canapés, we applaud the fortunate winners, meet up with old friends and make new ones. It all makes for a very jolly evening.

This year I was particularly struck by how far the Poetry Society has travelled in the last few years. The sticky period is now well in the past and there is a wonderfully positive and

supporting atmosphere. Much of the credit for this goes, of course, to Judith Palmer and her excellent staff. They have worked tirelessly to bring off an amazing transformation and are to be congratulated not only on the way they have put right things that were wrong, but have also launched out into new and exciting endeavours.

The Ted Hughes Award was set up by Carol Ann Duffy when she became Poet Laureate, and

generously offered to donate her annual honorarium from HM the Queen to fund the £5000 prize each year. It is a little different from other prizes, honouring both excellence and innovation in poetry. This year the prize was won by Maggie Sawkins for her multimedia live literature production, ‘Zones of Avoidance’, which explores and reflects on her daughter’s descent into drug addiction.

You can read some of Maggie’s poem on the Poetry Society website; but here’s a taste:

I’m reading ‘The Confessions of an English Opium Eater’ –

with no coat or socks, in search of a fix.
I want to understand what divinity led her

to set up camp in the derelict ‘pigeon house’
after running out of sofas to surf.

For those of us who write, our writing is often a way of trying to make sense of experience, attempting to understand ourselves, other people and the world as well as to celebrate it.

Congratulations, too, to Linda France, who has won the 2013 National Poetry Competition for her poem ‘Bernard and Cerinthe’. With well over 12,000 entries, the winning poem is likely to be a bit special, and Linda’s poem certainly is. I’d like to insert an extract from the poem here, but it all hangs together so beautifully that it doesn’t feel right to take bits out. So buy the latest Poetry Review and read this wonderful poem in full. Congratulations should also go to the three judges, Julia Copus, Matthew Sweeney and Jane Yeh who undertook the mammoth task of reading all those thousands of poems. Obviously judging poetry competitions is always subjective, but it is impressive that these three were unanimous in their choice of first prize.

Two prizes of £5000 each on one night makes it sound as though poets get a cushily life; but the reality for the vast majority of poets is that, apart from a trickle of financial reward from publications, small competition wins and readings, love and satisfaction are the main rewards they are likely to reap for their all-absorbing commitment to writing. But on an evening like the one I’m describing here, there’s also the fun of being part of a lively and talented community and spending an evening with like-minded people for whom poetry matters immensely.

Anyone who knows me will realise that admin and AGMs aren’t my cup of tea; so you will no doubt be a little surprised to hear that I had a very jolly time at the Poetry Society’s AGM earlier this week.

The venue for the evening was Keats House in Hampstead Heath. This is the house where John

Keats lived between 1818 and 1820, and where he fell in love with the girl next door – Fanny Brawne. He wrote ‘Ode to a Nightingale’ here, though I suspect it’s many years now since a nightingale ventured this far into North London. The house is now a museum, dedicated both to the memory of Keats, and also to poetry in general, so it was entirely fitting that the Poetry Society should hold its AGM there.

We were welcomed with wine and nibbles, then Sir Stephen Irwin, the Chair of the Poetry Society, gave a very positive report of the last year at the society. It is no secret that the Poetry Society went through a rough patch a couple of years ago, but over the last year, the dedication, hard work, fortitude and good humour of the staff have pulled the society through and brought it back to full strength. All the staff are once again in place, and what  a lovely lot of people they are! The Director, Judith Palmer, who has done so much to bring the society through its difficulties, gave a report of recent activity, and the long list of events and work with young people was impressive.

With the business behind us, we replenished our glasses and then moved on to the poetry reading. Three of us had been invited to read, with an emphasis on celebration to set us thinking about the festive season ahead: R V Bailey, Dannie Abse and me. 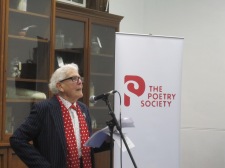 Rosie read first, starting with a few general poems before moving on to some of her Christmas poems, which she described, with wry humour, as ‘gloomy’. One of these,  ‘At Maison Miller’, is

in the voice of an elderly woman at the hairdresser’s trying hard to be enthusiastic about going to stay with her family for Christmas and knowing she is going to end up feeling sad and lonely. Several of the poems Rosie read, including this one, were in Credentials, the collection of her poems published by Oversteps last year.

I read next, and like Rosie I began with some new pieces,

followed by several of the poems from my collection festo: celebrating winter and Christmas. I thoroughly enjoyed reading to this packed audience of poets who responded with such fantastic warmth and enthusiasm. 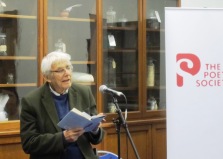 When I was a student I went to hear Dannie Abse reading his work and remember being impressed that a practising doctor could at the same time make a name for himself as a poet. Little did I know that this same poet would be writing and performing his poetry many years later, or that I would enjoy the enormous privilege of reading with him at the celebration of his ninetieth birthday.

Dannie has lost none of his dynamism and charm, and his voice is as strong as ever. It was very fitting that after Rosie and I had been presented with huge bouquets of beautiful flowers, the lights were lowered and a birthday cake, twinkling with candles, was brought to the front for Dannie to blow out the candles before the cake was cut and shared with everyone present. As ‘the icing on the cake’ of the evening, it has to be reported that the cake was delicious.

Thank you to all at the Poetry Society for organising such a happy occasion; and thanks to the lovely audience who made it all so worthwhile. And once again, many happy returns to Dannie Abse on his ninetieth birthday. 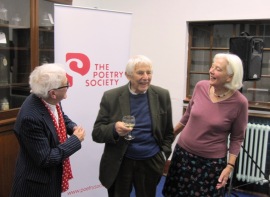