Once upon a time there was an international festival of the arts that took place in Edinburgh during the summer. Although it had a good name and drew performers from many countries,it became fiendishly expensive, so another festival, the Fringe Festival, started up. Unfortunately, this soon became too expensive for many people too, so the Free Fringe Festival was born, with hundreds of free events in the city. But that is not all. Edinburgh in summer has become a place (and season) in which many festivals flourish, including the International Book Festival, the Just Festival (formerly the Festival of Peace and Spirituality), the World of Dance Festival, the Political Festival, the Film Festival, the Jazz Festival and, new kid on the block, the Edinburgh e-book festival. So now the city erupts with festival-fever each summer, and there are probably far more events than there are people to attend them.

A walk down the Royal Mile gives a frenetic taste of what is going on. It is fun, lively, crowded

and mostly good-natured. There are jugglers, actors, musicians and every other sort of entertainment imaginable – and many of them are touting for audiences for their shows; so unless hands are firmly kept in pockets, they are soon filled with leaflets about the many and various delights on offer. 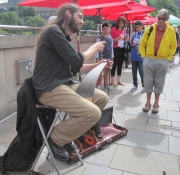 Despite the lively atmospere, I have to admit that there is something vaguely ridiculous about thousands of events being promoted, worked for and in some cases paid for, and then many of them playing to audiences that would shame any self-respecting artist, musician or poet. But having said that, everyone seemed to be enjoying themselves, and as long as one could escape from the crowds after due immersion, it was fun.

It was something of a relief, on moving on to the Meadows, to find a quiet poet sitting at a small desk, offering to write a poem to order on a subject chosen by the passer-by. Her name was GennaRose Nethercott and, naturally, I stopped to talk to her and order a poem. She asked me for a subject and, as I was writing about arches myself at that point, I suggested a poem about arches, went off for a coffee, and returned about 20 minutes later. Here is the poem she had written:
Arches
A stone giant bows,
its arms bent like a tulip stem
in wind. Such a strong beast –

This leviathan is more prayer
than canyon. Brick alight
with wind. Can grace infect
even the hardest of us?

The heaviest rocks?
Soft, even with such a weight?

I thought GennaRose was extremely brave to sit there accepting whatever subjects were thrown at her, and producing fairly decent poems on those subjects in so short a time.

My own reading this year was as part of the Just Festival, and took place in St John’s Church at the west end of Prince’s Street. This is an exciting festival of music, dance, poetry and art, with an international and inter-faith flavour. I read for an hour and sold some books; and it was a particular delight when my grandchildren donned animal masks and joined me for the final poem of the afternoon.

Marquees in Charlotte Square provide the venues for all the events of the International Book Festival. Audiences are in general large, enthusiastic and intelligent.
I booked in advance for two events and, as the large tent theatre was completely full on both occasions, I was glad that I had done so.

The first event was an interview with the wonderful neurophysicist, Susan Greenfield. Susan has written a novel, ‘2121’, which is a dystopian vision of a world in which virtual technology has taken over from reality. But most of the interview, ably conducted by Ruth Wishart, concentrated on Greenfield’s work on Alzheimers and the efforts by her team in their search for a way to stop the destruction of brain cells in that dreadful disease. The hour flashed by, as Susan spoke with passion, erudition and charm.

The next day the theatre was again full to capacity for a conversation between Rowan Williams and Julia Neuberger. I have long been an admirer of Rowan’s and it was good, as ever, to listen to someone with such a huge brain and a gracious manner.  Many subjects were covered in the hour, but of particular note, perhaps, were his reflections on the word ‘spirituality’ (which for him involves connectivity with others), the distinction between knowledge and scientific facts (on which he took a fairly Platonic line), and the robustness that should be part of the Christian’s response to criticism (in regard to which he quoted one of his lecturers at university who declared that a good religion is one that trains its own critics).

In the afternoon we took a coach out to Hopetoun House where students from St Andrews were performing ‘The Tempest’ on the beach. The parts of Ariel and Prospero were particularly 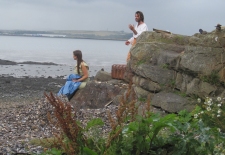 well-played, but all the actors caught the spirit of this wonderful final play of Shakespeare’s; and the waves of the Forth beside us added to the atmosphere. We moved, enchanted, to various points on the beach as the action progressed; and we drank in the wisdom of the bard, filtered through the modern approach of the young performers.

Amazingly, we had reasonable weather throughout our stay in Edinburgh. Each night at 10.30 the peace was shattered by bangs as the fireworks marked the end of yet another Tattoo performance, and we were even able to catch a glimpse of them from our window.

On now to my next poetry reading, which will be in Norfolk next week.
As ever: ‘Poetry is always moving’.