This is the day when I should have arrived in New Zealand; and the first of my readings there was to be this evening at the charmingly named ‘Thirsty Dog’. Because disaster struck us half-way over the world, I can’t do this reading, or any of the others I was due to give in the next couple of weeks. Charles Hadfield and Hilary Elfick will be reading at most of the events I was going to, and they are kindly going to present some of my work to those audiences. So, instead of standing up and sharing my poetry, I thought I’d reflect on poetry readings in general in this blog.

All through my adult life I’ve had the privilege (and sometimes the burden) of giving countless lectures, talks and sermons. In recent years, however, I have far, far preferred to give poetry readings – and I’ve been extremely fortunate to be invited to read all over Britain and in several other countries as well. If by any chance you’re interested in where all these readings have been, you can find them on the Poetry page of my website (www.marriages.me.uk). I get a tremendous kick out of giving readings: writing can be a rather solitary occupation, and suddenly, at a public reading, one has the opportunity to engage with other people, to make them laugh or sigh, and to feel the energy of a common delight in poetry flowing back and forth between reader and audience. It really is a wonderful feeling when other people share and enjoy one’s poetry.

I’ll pick out just a few of my favourites to give a flavour of the range of opportunities for poets to share their work.

I was stunned and excited to be invited to read for a whole evening at Little Gidding a few years ago. The thrill this event gave me, obviously, was because of my life-long love of Eliot’s Four Quartets. The reading took place in a large and crowded, but cosy drawing room; and I was encouraged to go on reading for over two hours. 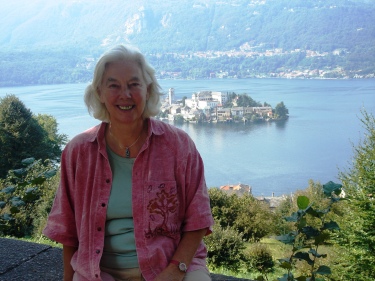 Poetry on the Lake in northern Italy is one of the highlights of the year for quite a number of poets. Like others, I first went because I was successful in their annual poetry competition – and then I was drawn back year after year. The readings are not so much large public events as good poets getting together to share their work with others who are on the same wavelength.

The list of participants is star-studded, and in a beautiful venue in the sunshine (well, mostly in the sunshine), friendships develop and inspiration flows.

One morning at the festival is spent reading at the various shrines on the Sacro Monte. Then, at the end of the weekend we are also treated to a wonderful piano recital in the Casa Tallone, a thousand year old building on the island, where Tallone pianos used to be made.

There are dozens of excellent poetry and/or literature festivals in Britain. Sadly I haven’t yet been invited to read at Aldeburgh, Ledbury or Stanza, but I’ve read at most of the others. I’ve been fortunate enough to read at Ways with Words at Dartington for several years running; and I read at The Space in another part of the Dartington Estate at the end of my poetry residency with dancers and choreographers from the Ballet Rambert. For a poet who is crazy about dance, this was a wonderful opportunity to indulge in some of the best things in life.

Venues at the festivals vary, and one of the more interesting ones at which I read was the Freiburg City Festival in Germany. The challenge was to read on a podium in the city square, and although seats were put out, I doubted if anyone would come to sit on them to hear a poet reading in English. However, I was mistaken, and before long all the seats were taken and there was a crowd of onlookers standing as well.

Audiences for poetry readings range from the polite to the wildly enthusiastic. There was a nice example of the latter, when Carol Ann Duffy read at the Torbay Poetry Festival this last autumn and she received a well-deserved standing ovation. I had a particularly warm and enthusiastic audience at this last year’s Guildford Book Festival, when I read and Peter Terry sang a selection of lieder and English songs. Music can work well with poetry readings, and when I read with a couple of other poets in the Lewes Linklater Pavilion recently, our readings were interspersed with guitar pieces.

As well as festivals, there are many other opportunities for readings. I’ve read in a number of bookshops, at the launch of magazines and anthologies that include poems by me, the launch of my books, prizewinners’ events, as the entertainment at parties, and regular poetry events such as the Troubadour in London, the Uncut readings in Exeter and pub gigs such as Tradewinds on Dartmoor. Other great venues have been the Edinburgh Fringe, the Walpole Old Chapel in Suffolk, the Dower House at Morville Hall in Shropshire, Slimbridge and Leighton Moss bird reserves and at university venues. There’s also usually an opportunity to read after giving a workshop or judging a competition. If you’re looking for readings, the possibilities are endless.. 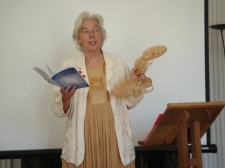 And yes, as every poet knows, giving readings is the best way to sell one’s books. In general, the major gatherings of poets do not lead to large sales, as most of the audience have plenty of poetry books already and are probably more interested in selling their own than in adding to their groaning bookshelves. Other audiences will snap up the books and delight in having them signed by the poet.

Then there is the issue of payment. Most poetry events are fairly cash-strapped, and some others have no compunction in exploiting writers if they can get away with it. It is unusual not to receive at least one’s expenses, and there are some shining examples of organisers who value and reward their poets. Among these, Patricia Oxley, the Editor of Acumen and organiser of the Torbay Festival, is one of the best. Of course one writes, and reads in public, for love. But it is amazing how much more valued one feels when someone like Patricia shows her genuine respect and appreciation by paying a proper fee. And several more of the events at which I’ve read have been kind enough to reward me quite generously.

After so many readings this last year, and the fact that I expected to be away now, I rather feared there may not have been so many in 2013. However, the invitations continue to flow in, and between now and the summer I have already been booked to appear at the Wenlock Poetry Festival, Cheltenham Poetry Festival, the Bath Week of Good Poetry, the launch of a magazine in Swindon and at Ways with Words.

Pity about New Zealand, though!